Samran Katejumrong is a Thai artist, a master Khon Mask artist, who graduated from The Center for Education Karnjanapises (Painting) and from The Center for Education Karnjanapises (Khon). has the speciality in Khon mask, ancient Khone mask, for both medium and big sizes, so that there are many people support him and his art works. Khōn performances are retellings of the Rāmakien, the Thai epic poem, using costume and dance. The origins of the Khōn performances can be traced back all the way to early Thai martial arts. Two martial arts, the Sapayuth and the Sapakila, provide the basis from which the Thai war dance, the Krabee-Krabong (“Single-Edge Sword and Staff”) evolved. These three elements further evolved into three separate war dances: the Mong Kroom, the Gula Tee Mai and the Rabeng. These three dances were probably performed at the festival of Chak Naga Deuk Dumban (“Pulling the Giant Serpent”) before both the Siamese and Khmer courts. Much of the Khōn choreography consisted of elements of these war dances, and, in fact, many of the musical numbers in Khōn performances have names that are similar to the musical numbers in the Krabee-Krabong dances. Another source of Khōn performances is the Nang shadow play, which is said to have originated in Java or Malaya and can be traced back in Thailand to the Ayudhya period between the fourteenth and eighteenth centuries. Nang shadow plays use large pieces of leather in the shape of different characters to tell the story of the Ramakien. Nang puppeteers held these enormous puppets or shapes with both hands while dancing and miming the narrative. The Thai Nang performances, unlike the Javanese, use dance steps that are very similar to the steps of the Krabee-Krabong dances. Originally, Khōn performers did not wear masks. The actors instead painted their faces to resemble their characters, similar to the Rāmāyana performers in India. However, Thai Khōn performances involve many actors and it’s difficult to paint the faces of so many performers. Masks were therefore used very early on: they have been in use since the late Ayudyha period, from the reign of King Boroma-Kote (1742 – 1743) up to the current period. Early Khōn masks were modeled on the masks used in the old Chak Naga Deuk Dumban (“Pulling the Giant Serpent”) performances mentioned earlier. These early masks were placed on top of the performers’ heads rather than covering their faces, which later evolved into masks covering the entire head as they are today. The Rāmakien contains a large variety of characters, each with their own rank and special characteristics. The design of the Khōn masks, then, has to make it easy for the viewer to differentiate between the characters. Each mask has its own distinctive facial features, colours, headdresses and ornaments. There are four broad categories that Khōn masks can be divided into Humans and deities (These faces look like human faces but with stylized features and ears. Their faces are smiling and relaxed, with mouths and moustaches that curve upwards), Demons (These are more beast-like, with expressions of anger or hate. Their eyes are either wide open or half-closed “crocodile-style” eyes. Those with wide-open eyes usually have gaping mouths), Monkeys (The monkey masks are known for being especially beautiful and elaborate. Like the demons, they have either gaping or closed mouths), and various other animals or animal deities (These differ depending on the animal they are based off, and sometimes do not cover the entire head of the actor). 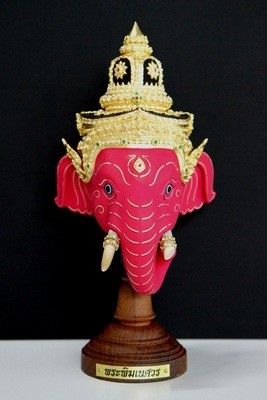 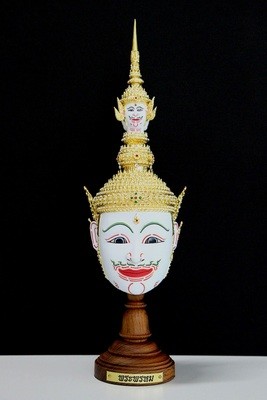 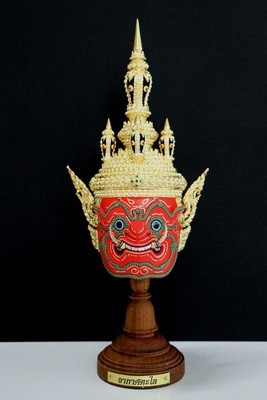 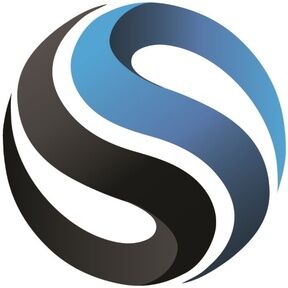